Ah Valentine’s Day… the day that isn’t good for anyone.  It puts too much pressure on couples wondering what they should be doing, how far should they go on Valentine’s Day, and if they don’t do enough its grounds for an argument.  On the other side there are the single people who get to be reminded of all the warm fuzzies they’re missing out on by living their single lives.  I myself have 2 literal warm fuzzies, so I’m not missing out on much.  However, if you share my sentiments about Valentine’s Day, I’d like to introduce everyone to a Macedonian holiday. In wonderful Macedonia (yeah, its a country, just north of Greece, no, it is not a part of Greece, yes, they have the coolest flag ever) today is the day they set aside for Sveti Trifun.  He was pretty much some super cool dude that became the patron saint of the vineyards.

You know what that means?  Today in Macedonia, today is kind of like their version of St. Patrick’s day.  I’ve decided if there was ever a day to fake be Macedonian today is that day.  Instead of being shot with an arrow from a naked chubby dude, take a shot of rakija with a good friend. 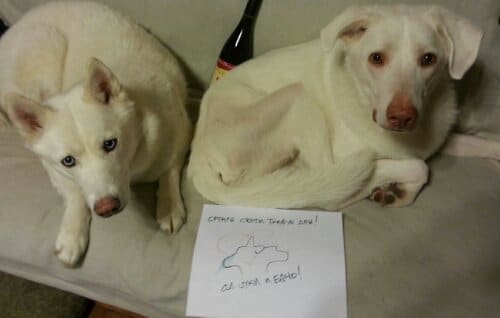 However, Bacio seemed to have gotten hit with the arrow before the vino, that little pup tried humping Yuki all morning.  I thought that was probably a good thing in regards to his recovery because that’s a lot of movement in the hind quarters.  In all seriousness though, he’s been doing better and getting stronger.  We made it around the block twice this week.  I use a sling to get him up and down the stairs and its working out well.  I think his non-operated on hip is starting to be painful supporting all his weight now.  He swings that leg in big motions while we’re walking while the right leg seems to go straight forward and back.  I’m probably going to bit the bullet and go for some hydrotherapy because I think that will be best in taking some of the pressure of his back end while he’s strengthening the muscles.

Just a quick last note, I want to say thank you again to all my friends and family for the support during all this surgery stuff.  You’ve all been very helpful and accommodating.  Bacio sure is lucky to know all you guys!