It has been about 3-4 weeks now since I have started making the dogs their own dog food.   I had always kept them on high quality food.  I used Blue Buffalo’s fish and oatmeal food for the longest time.  Yuki has always been allergic to chicken and Bacio doesn’t do very well on lamb. The past year has been tough trying to find a kibble that suits both the dogs.  Bacio started having head tremors last November.  Initially I thought it was from pain, he snapped one of his teeth, and it needed to be extracted.  However when last January and February rolled around he was still getting the occasional tremor episode.

I did took him to the vet for the tremors, but because they weren’t happening very regularly the vet didn’t want to put him on medication.  I was to watching him and just make note of when it happened and what went on the days that it happened.  That wasn’t leading to very promising information, and so I started sleuthing around to see if I could try and help my little bear.  I read a few articles about grain and the negative effects they sometimes have on dogs.  I decided to try a grain free food for the pups.

After switching to a grain free fish based food (Innova I believe although I can’t really recall exactly) Bacio stopped having random head tremors.  It was great! But then, 2 months after switching, he decided he didn’t like the food and stopped eating it.  I tried so many different grain free foods.  It seemed like the ones he liked to eat, his digestive system didn’t agree with, and nothing solid was coming out his other end.

In the middle of all this mess Bacio ended up getting really sick.  I had to make him a very bland diet during this time, mostly brown rice and boiled meat.  Once he got over whatever doggy flu he had, the bland diet seemed to work better with his stomach.  I slowly started him back on the kibble, but the only type of food that I could buy that satisfied both of the dog’s dietary needs was costing me a fortune every month.  This is when I started researching homemade food, and doing cost analysis.

I use ground beef, eggs, and sometimes tuna as proteins now for the dogs.  About once every 10 days I make a batch of food with brown rice, ground flax seed, beef, and a Normandy blend of frozen veggies (zucchini, squash, carrots, cauliflower, and broccoli).  If I have veggies around the house that need to be used up I will toss those in as well.  For their breakfast I give them a hard boiled egg (shell on for calcium), and some blueberries with their food.  I have been supplementing the food so far with The Missing Link, but I may switch to a different multi-vitamin.  Yuki was getting some sort of skin infection under her chin before switching food. Keeping it clean wasn’t really helping, and I was suspecting it was a yeast infection, so I added some Greek yogurt to their breakfast and it has started clearing up now. 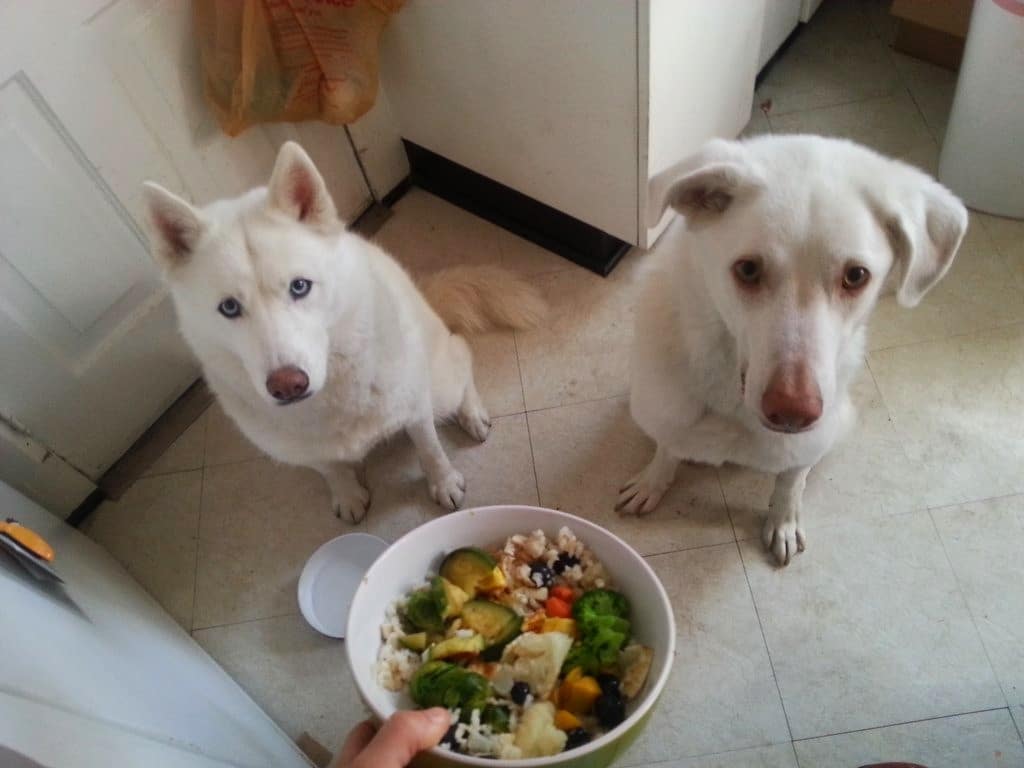 They eat better than I do these days.

It is really hard to find a good recipe online for homemade dog food.  Most sites say to contact your vet, or a pet nutritionist.  I’ve been just making their food and adjusting as I go based on their reactions to it.  Bacio has so much more energy now, and his teeth look so much healthier, he hasn’t had any tremors, and he is actually excited about eating.  Besides Yuki’s rash disappearing there isn’t much change in her, but that dog has an iron stomach, as long as it isn’t poultry.

I’d really like to hear other’s recipes and opinions on homemade dog food and supplements.  What ratios do you use?  Proteins?  Has anyone used barley instead of brown rice?  Leave a comment or email me my2whitedogs@gmail.com!  Thanks in advance!