Yesterday was Bacio’s first day of therapy.  I was excited about, more so than him.  We braved through the wet snow storm to get there, even though it’s only 5-10 minutes from our living quarters.  This session was a double session.  We started off with laser therapy.  The laser therapy stimulated the cells in his muscles and bones.  It helps the body “wake up”, so they can start healing, building new tissues, all that fun stuff… I wonder if they can laser therapy my brain…

Bacio is Mr. Nervous so he did not like anything that was going on.  We had to wear these uber cool glasses.  They looked like the sunglasses old people wear to the beach.  I got a bit concerned about Yuki, since she was in the room… I jokingly asked if they had a pair I could put on her. To my surprise, they did have a pair. 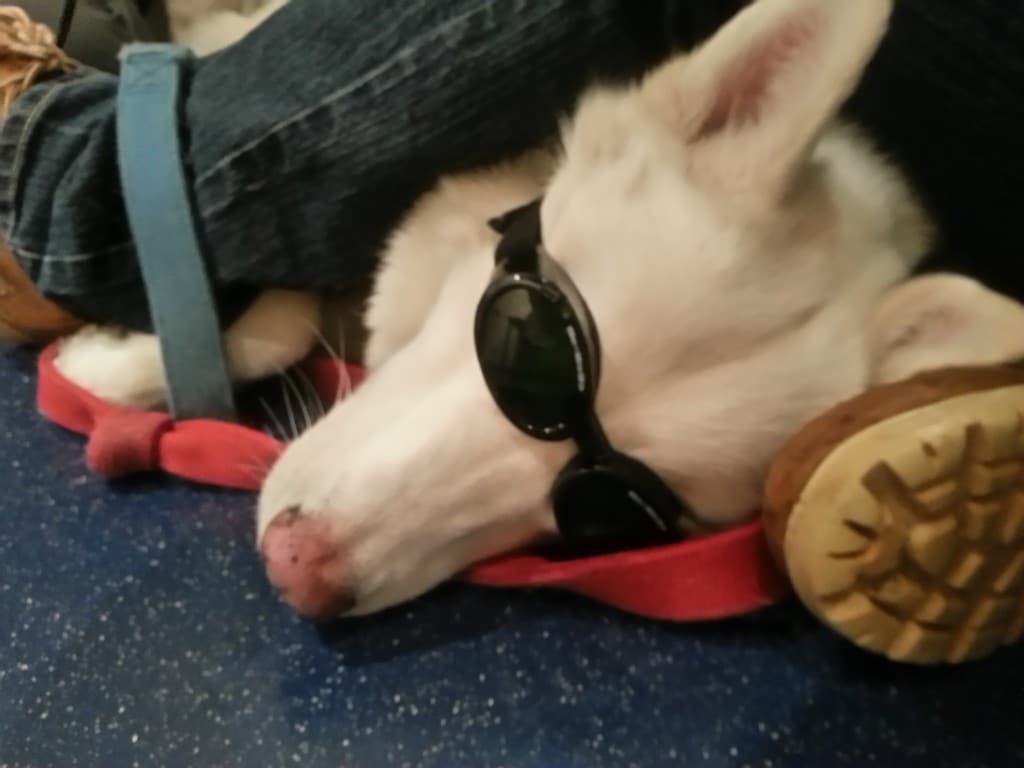 I think I need to get a pair of these for the summertime.

They used the laser on both of his hips.  It looked like a back massager with a glowing top.  The therapist moved it along his hip and his knee and leg.   The whole process took about 15-20 minutes.

Here you see the sweet shades, and the glowing laser massager.

After the laser therapy, Bacio did some floor exercises.  They have these foam blocks and we tried to get him to walk on them, and then stand on them.  Walking was fine, but the little bugger doesn’t stand for any length of time.  He just immediately sits down. We tried treats and coaxing, turns out therapy with Yuki at his side worked the best.  He’s a very stubborn dog, and if he doesn’t change his attitude about these therapy sessions he’s going to be getting a pair of wheels for his birthday in November.  He did a few incline exercises as well and then it was off to the water.

I chose to take Bacio to Integrative Pet Care because they are one of the few facilities with an underwater treadmill.  This giant tank fills with water once the door is sealed and he gets to walk without the impact.  I had a feeling he was going to be nervous just with being locked in the tank and having a treadmill underneath him.  Someone was in the tank with him, and he got a life jacket to wear.  He didn’t put up too much of a fight getting in, but he was sort of just lifted in via the life jacket.  Once he was locked in and the water started filling, his eyes got bigger than the moon.  He was sooooo terrified at what was happening, but he did pretty well considering.  The treadmill started slowly and he did a surprisingly good job for his first time.  He couldn’t go very long.  He only went two times, both a minute long each.  The last 30 seconds of that second minute he did not want to be moving.  You can see for yourself how well he did.

After the pool they rinsed him off and dried him off with a blow dryer.  When we got home, my parking spot in front of my apartment was still open. Win! Bacio got inside and immediately laid on his memory foam bed.  Later in the evening I iced his hip, and before we went to bed I iced it once again.  Our next session is tomorrow actually, and we’ll continue with 3 sessions a week for the first 5 weeks of his program.